I started my photography career shooting film. Man, there are times I miss those days, especially when it comes to monochrome photography. I’ll never forget those early times of working in the darkroom, and my delight at the deep blacks and crisp whites in a print I’d just developed. I love playing around in Photoshop where I can mimic the effects I got with film. Join me in my tutorial on how to create a sultry black and white image in Photoshop. 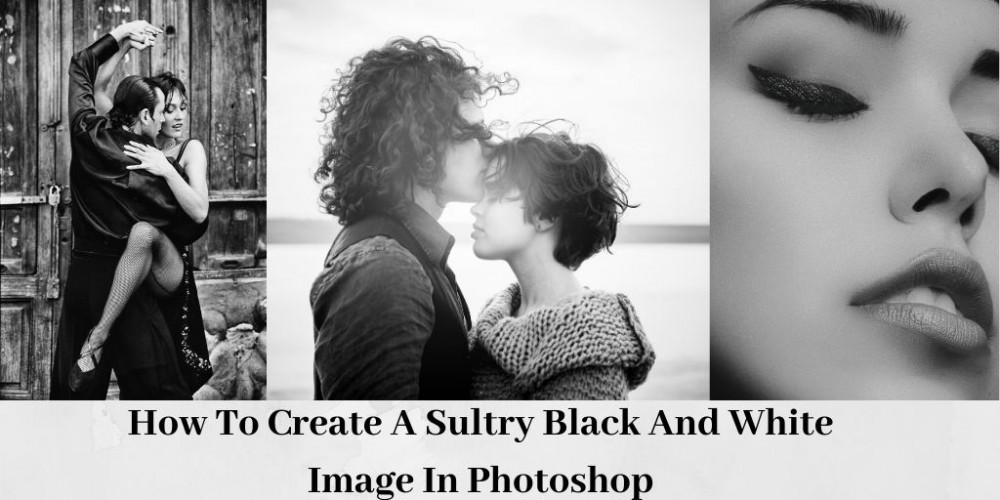 What Makes A Good Black And White Image Great?

Have you ever edited a batch of photos and thought to yourself: “Wow, this image would be incredible in black and white?” I know I have. What characteristics make an image black and white worthy? First and foremost, composition is key. Does the image have appeal in terms of symmetry, compelling shapes, intriguing angles, unique perspectives, and interesting lines? If so, it could pop when the color, which can be distracting, is removed.

This hold trues for all genres of photography, whether that be landscape or macro photography, fine art photography or portraiture. Look for elements that would stand out even more in a monochrome image. This could include interesting textures and lighting, such as high contrast between the shadows and highlights. These elements may stand out even more in the absence of color. Distracting backgrounds, that don’t add anything to the image, are often less noticeable in black and white, as well.

[Read More: How To Photograph Flowers and Insects]

Expression and mood are primary elements that can make a color photo look more dramatic in black and white: a knowing glance between a bride and groom, a pensive or inquisitive expression on a child’s face, the palpable feelings of love and regard between family members, or a look of remembrance on a elder’s face. This is what I love about black and white photography, the ability to capture feelings and emotions that are bumbling beneath the surface.

Begin by opening a colored image in Photoshop that you’d like to turn to black and white. Here’s the photo I’ll be using: 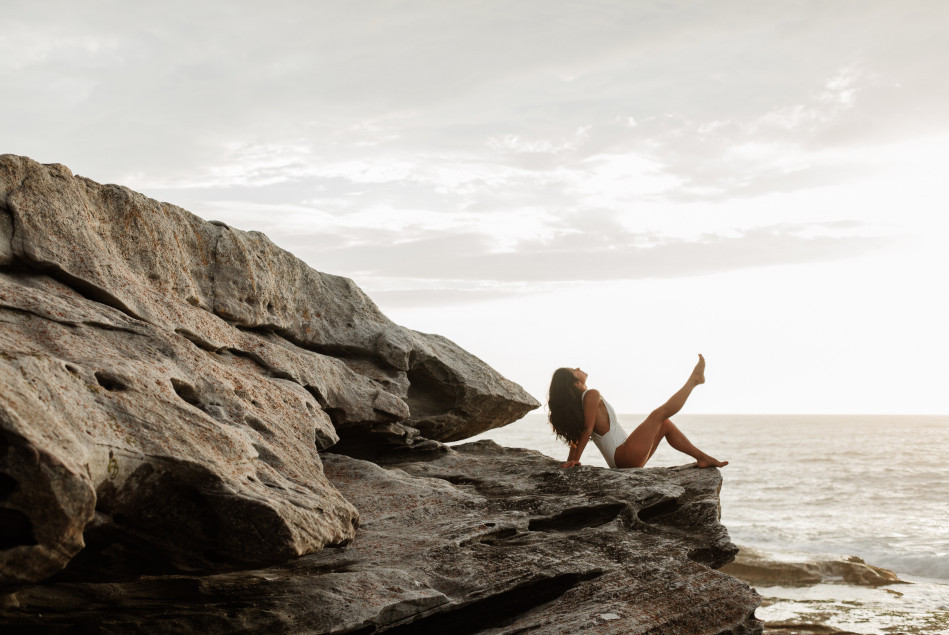 Open up the layers panel. At the bottom, you’ll see the icon for the adjustment button. It’s the middle icon. Press it to open the drop down menu. Now click “Black & White:” 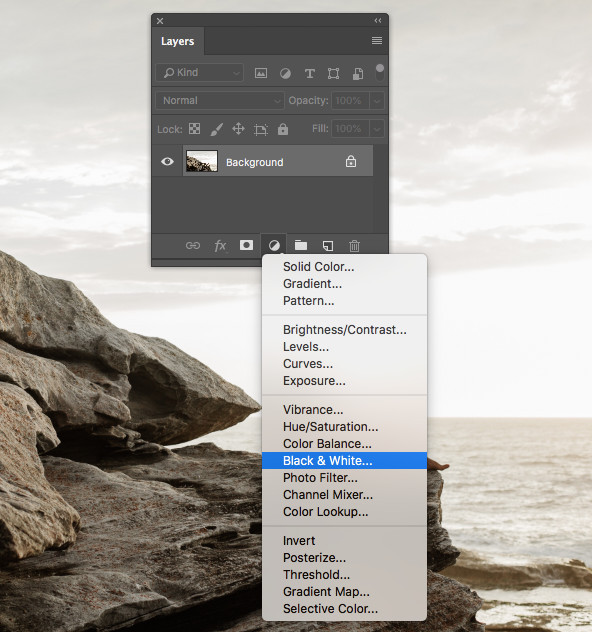 Your image is now a very average looking black and white photo. Nothing to write home about. Not to worry, we’re going to make some adjustments so that the image will be more contrasty and moody. 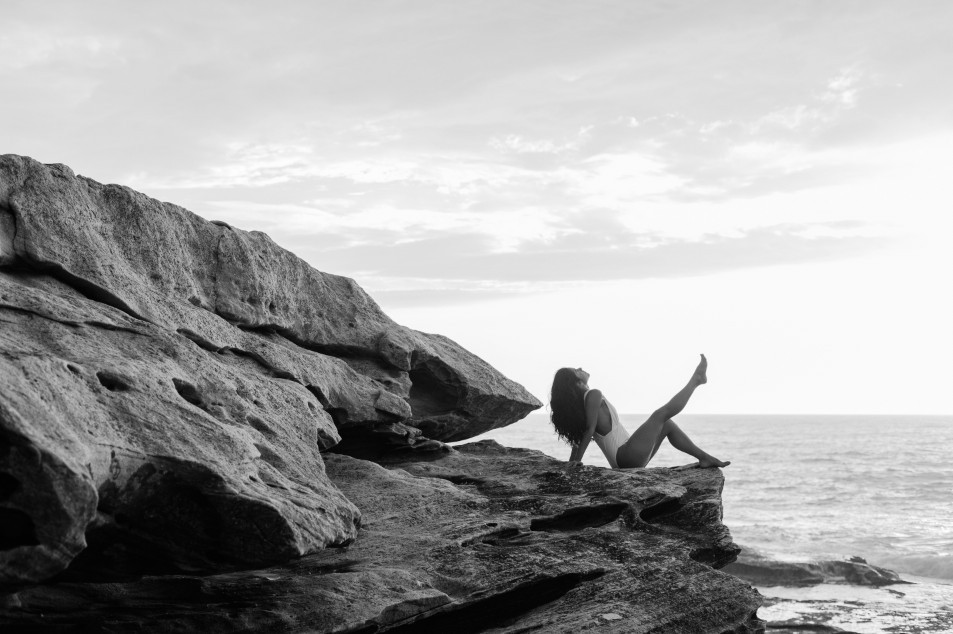 Revisit your the adjustment layer button and press on the “Brightness/Contrast” option: 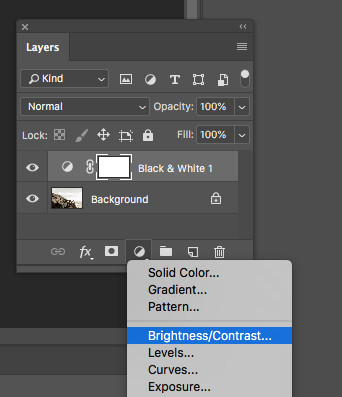 I’m going to reduce the brightness to -3 so I can see the clouds in the sky better, at the same time bumping the contrast up to 45. I like black and white images with high contrast. If you prefer your images to have less contrast, then adjust accordingly. The image is less gray than it was previously. Here’s what my photo looks like after fiddling with the contrast:

Go back to the layer’s adjustment button and press “Solid Color.” This will allow me to add a little noise to make the image more dramatic. Once you’ve pressed “Solid Color,” you’ll see the Color Picker box pop up. Choose a color in the gray tones. I’m choosing a light grayish color. Hit “OK:” 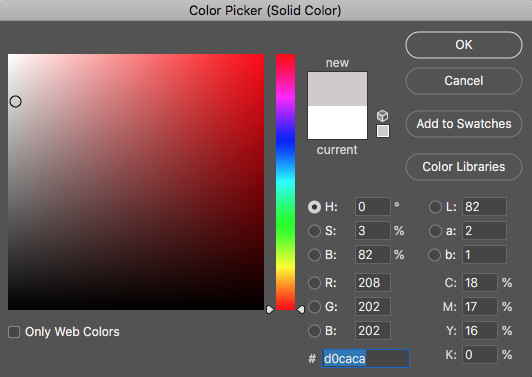 The image now appears to be gray. Right click on the top layer (gray layer) and click “Rasterize” to be able to edit the layer: 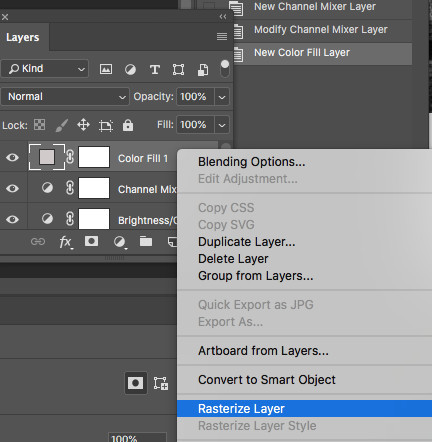 Go to “Filter” in the top menu. Press”Noise” and “Add Noise.” 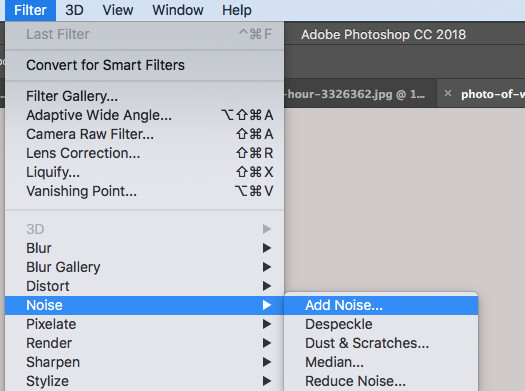 You’ll now see the noise panel. Increase the “Amount” to the highest setting. Click the “Gaussian” tab, and make sure the “Monochromatic” option is checked. Press “OK:” 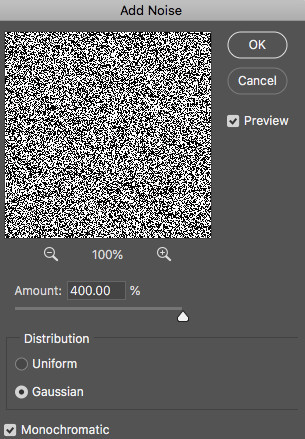 Go back to the layer’s panel and choose “Soft Light” in the blending mode drop-down. You’ll find these modes under “Normal” and to the left of “Opacity.” 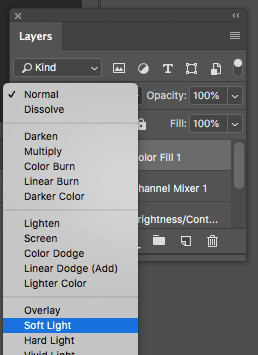 Play around with the different blending modes, along with the opacity, to get the effect you want. For instance, here’s what “Vivid Light” looks like with the opacity reduced to 13%. I also adjusted the brightness and contrast by going to the top menu and selecting “Image,” “Adjustments,” and “Brightness/Contrast.” Keep in mind, these adjustments are quite subtle but add to the appeal and mood of the picture: 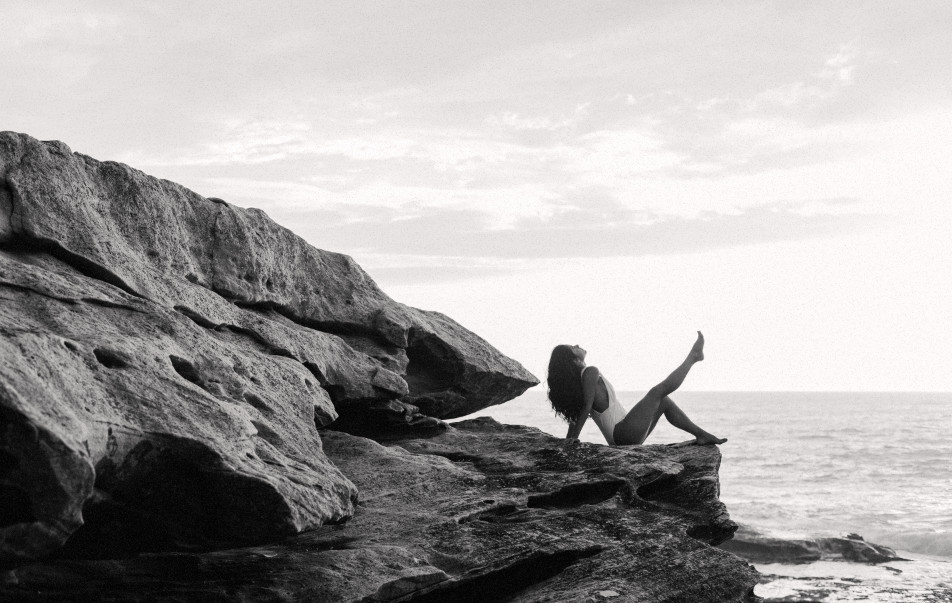 Remember how I added a gray screen in one of my previous adjustment layers by selecting “Solid Color?”  You can go back and add an additional color screen to augment the effect. This time I’m going to add a warmer-toned color and reduce the opacity until I like what I see, but this time I’m going to click the “Screen” option blending mode. 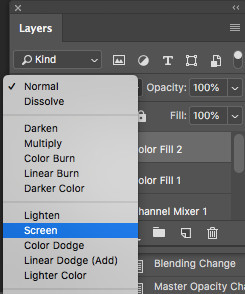 I’m going to paint in some light. To do so, I need to invert the layer mask. Hit “Command” and “I.” The layer mask that was white is now black: 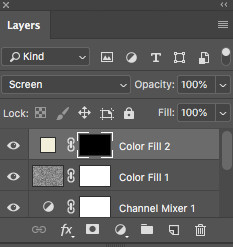 Now I’m going to drag my “Color Fill 2” layer so it’s above my background layer and beneath my black and white layer. This will add light to my color image in case I ever want to use the color version. To rearrange layers, place your mouse cursor to the right of the layer box and drag to the desired position: 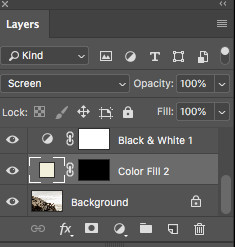 Click on the layer mask (the black square) in the “Color Fill 2” layer. In the toolbar to the left of the screen, you can see that my foreground color is white and background color black: 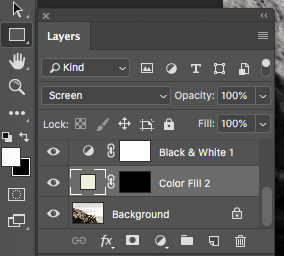 Using a brush set to around 30-40% opacity, I’m going to paint in the light in the areas I want. I can also add another blend mode if I want by adding another adjustment layer. Here’s my final image: 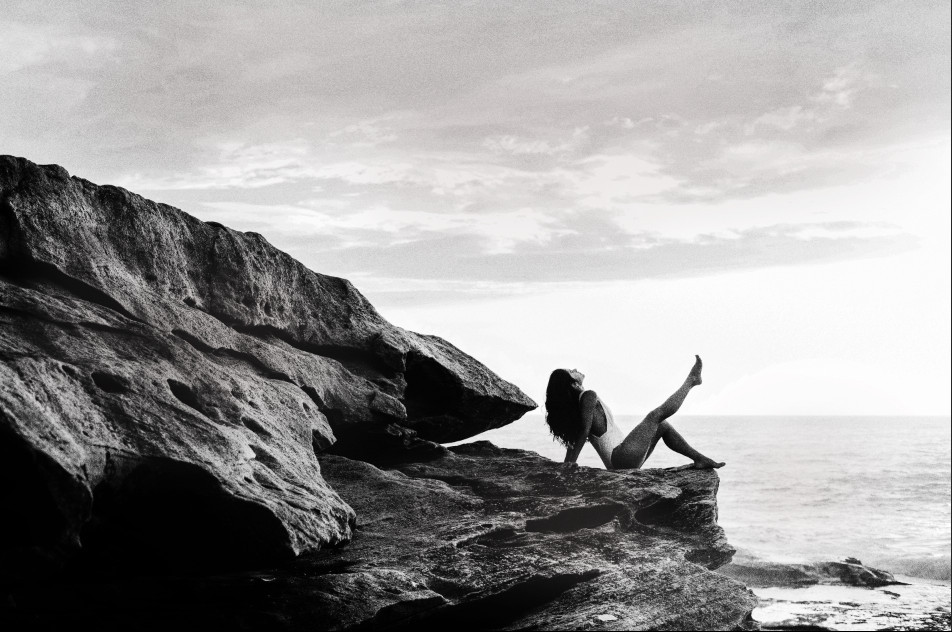 If you’re toying with the idea of buying Photoshop, but haven’t taken the leap yet, you can purchase it here.

Transforming color images to sultry black and white ones in Photoshop requires a few steps, but once you’ve done it a couple of times, you’ll be a pro. Have fun experimenting with the steps in this tutorial.

If you use Photoshop, how do you edit your black and white photos: Let me know in the comments:)