We all know that making mistakes is part of the learning process, but that doesn’t mean it feels good at the time you’re making them. There’s  good news – you’re not likely to repeat what you’ve already done if the results were less than stellar. Here are 10 photography mistakes that taught me valuable lessons and can do the same for you. 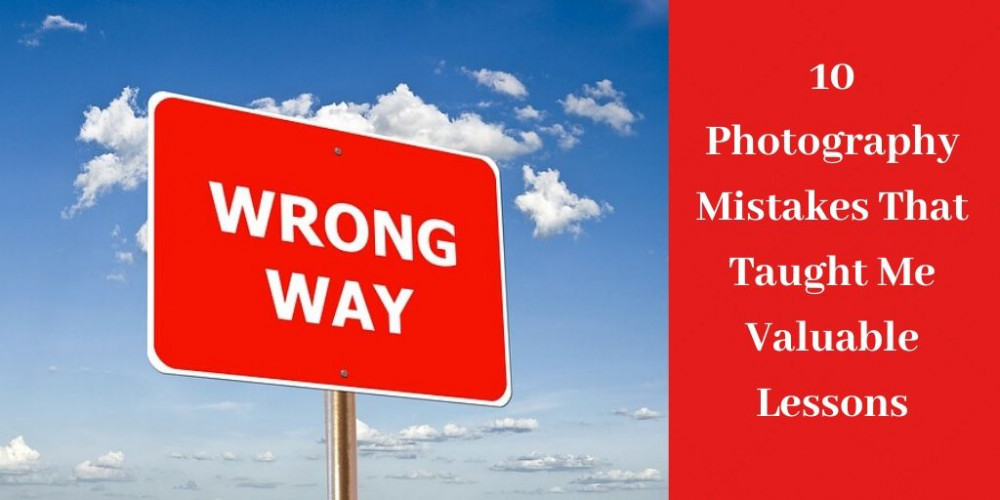 Trust me, don’t do this. I was photographing a large family group in a beautiful setting. Of course, this was when I was just starting out and didn’t know much. The setting of the grouping was gorgeous so naturally I wanted to capture as much of the scene as possible. I thought using a wide-angle lens was a logical course of action. Yet, it wasn’t and here’s why: when you use a wide-angle lens for family portraits, the people on the ends will have distortion in relation to others in the center of the image. And it shows NOTICEABLY and in the worst way.

This is because barrel distortion, caused by the curvature of the lens, is often the result of using the widest angle available on a zoom lens, which is exactly what I did. The poor victims at the edges of the image had noses that were bigger than they should be. I was mortified! Ask me if I’ve ever had that happen since, and I will answer with a resounding “Thank goodness NO!” It was truly embarrassing. The take home message, to avoid this unfortunate scenario, is to always group people in the center of an image when using a wide-angle lens. This will prevent the awful distortion I experienced.

2. Using Too High A Film Speed

This mistake happened back in the days, before digital was a thing, and I was shooting with a medium format camera. Keep in mind, ISO or “film” speed, has come a long way. Back then, not so much. I don’t remember the exact details, all I know is that I was shooting in poor lighting conditions, and assumed that using a high ISO would allow me to get a good exposure. What I ended up with was a properly (kind of) exposed REALLY REALLY GRAINY image. From then on, I have always carried a tripod, a fast lens (with a large aperature), and a flash. The lessons we learn…

3. Adding Too Much Saturation To An Image In Photoshop

This was a dumb mistake and one I should have caught, but alas, my client caught it instead. I was photographing a baby in my in-house studio, which is no easy task in itself. I was pleased because I got some great shots, and I was excited to start editing. This is where trouble set in. Since the baby had really blue eyes, I had the hare-brained idea that I would accentuate this feature. I started by bumping up the contrast, which is a dumb thing to do with baby photography anyway, since the goal is to make their skin look dreamy.

It gets worse. I then added, what I thought, was a judicial amount of blue saturation. I swear it looked pretty awesome on my computer screen.The mother of the baby called me saying that, while she loved the images, could I please do away with all that awful blue. When I looked again, “all that awful blue” just screamed at me: “You dummy, what were you thinking? Have I repeated that stupid mistake, absolutely NOT! Bottom line, don’t try to be cute with adding too much saturation. It’s anything but cute!

4. Using Too Small An Aperature For Portraiture

For the longest time, I used the kit zoom lens that came with my camera. The largest aperature I could get was f/4.0, which incidentally looked hideous. It was like it was trying to capture stunning bokeh, which was the goal, but it couldn’t have been further from the mark. All the tree branches in the background looked like thick spaghetti noodles.

Needless to say, I did a lot of editing. This is what actually led me to buy my 85mm, f/1.8 lens, which I’ve used extensively since. If you want incredible bokeh for portraiture, don’t use f/4.0. The sweet spot for me is around f/2.8, especially when I’m photographing more than one person. All was right with the world the first time I beheld the bokeh my 85mm lens produced.

5. Not Using A Tripod With Slow Shutter Speeds

I take comfort in the fact that many inexperienced photographers try to outsmart the system by trying to handhold their cameras at slow shutter speeds. Perhaps, we think we are the exception. I found out I wasn’t. Tripods used to drive me nuts, so I tried to avoid them at all costs. I thought they cramped my style. Of course, BIG mistake!

Years ago, I was photographing two kids, a brother and sister combo, and actually got some really great shots, EXCEPT for the fact that 90% of the images were blurry. Not deplorably blurry, just enough to ruin most of the shots. I was trying to handhold at 1/60th of a second, which may have been okay if I had had time to frame the shots, but these kids were little and we all know how that goes. From then on, I have always used at least 1/80th to 1/100th of a second shutter speed if I’m going to be shooting without a tripod.

6. Not Shooting In Manual Mode

It’s fairly common for new photographers to shoot in automatic mode instead of manually adjusting aperature and shutter. It’s just too darn easy. It does take a while to fully understand how aperature, ISO, and shutter speed work together. True to form, it took me awhile until I clued in that I would have much better control over my images if I shot in manual mode, which I have done ever since. It only takes a few blurry and out-of-focus images to realize that something has to give.

White balancing my camera used to scare me. I know, it’s so silly, since it doesn’t take a lot of time, and it’s not that complicated. Plus, it’s a great time-saver when it comes to editing. For some reason, I kept failing to do it UNTIL I photographed an indoor wedding with fluorescent lighting.

I’ll let you visually imagine the outcome. It was not good and rather embarrassing, and why oh why, did it have to be at a wedding?! White balance is essential for making sure the colors in a scene look realistic and as natural as possible. Now I take the time to make sure my camera is balanced for the lighting conditions I’m shooting in.

8. Using On-Camera Flash Without Bouncing It

How was I supposed to know I should bounce my flash? It’s amazing to me that I didn’t know. My first and last foray into using my flash without bouncing it was when I was asked to take family portraits in an indoor setting with inadequate lighting.

Like the inexperienced photographer that I was, I attached my flash to the hot shoe of my camera and pointed it DIRECTLY at the grouping. Can you guess what happened? Yep, there were horrible shadows around each and every head. I wanted to hide under a rock and not come out. Now I automatically bounce my flash, and am rewarded with soft, beautiful, flattering light, and no shadows.  Lesson learned!

9. Offering Too Many Choices

I wouldn’t necessarily consider this a mistake, but I tend to take way too many pictures. This results in too many choices for my clients, which can be extremely overwhelming. It also greatly adds to the editing load.

On the surface, offering a lot of images to paying clients seems like a good thing, but I’ve since changed my tune, after seeing time and time again the indecision in my clients’ glazed-over eyes. Narrowing down one or two images from 10-20 options is a lot easier than choosing from 60 great images.

10. Failing To Be Upfront About Cost Of Services

Not all my mistakes have been technical, some like this one have been business-related, which is an entirely different ball of wax. I remember photographing a wedding – soooo much work – and failing to be upfront about what my fee would be. I’m not sure if this was because I lacked confidence in my skills, or if I disliked the idea about discussing money so I side-stepped the issue. Guess who got the short end of the stick? That’s right, and I forever learned my lesson about always being transparent with pricing.

Oh, the lessons we learn as photographers. Please learn from my mistakes so you don’t have that awful pit in your stomach when you’re presenting your images to clients, and there’s really nothing you can say except, “Sorry, I GOOFED!

What are your biggest blunders? Let me know in the comments so I can feel better about myself:)

12 thoughts on “10 Photography Mistakes That Taught Me Valuable Lessons”

Scroll back to top